It was a cold but sunny day during my sophomore year. Following track practice, I nervously headed onto the second floor of Weiser Hall into my journalism professor Marty Dobrow’s office.

I told him I was applying to transfer.

By that point, I was convinced that Springfield College couldn’t get me to where I envisioned myself being in journalism. When I entered the communications/sports journalism program at Springfield, I joined because I loved sports and knew I couldn’t play professionally.

I didn’t think I could do that kind of work at Springfield — purposeful storytelling that would have an impact and leave a legacy. Marty disagreed, and said I could be the change I wanted to see.

That all changed as an intern with the Philadelphia-news website Billy Penn following my first year. I wrote about my friend and competitor, Kristian Marche, who was shot and killed a day before leaving for Penn State University, which he would have attended on a track scholarship. The story used data to show how Marche’s death was not an isolated incident in Philadelphia and that young Black men like me are particularly vulnerable because of the city’s gun violence issue. I realized then that narratives that use sports as a venue to tell larger stories were my passion.

I didn’t think I could do that kind of work at Springfield — purposeful storytelling that would have an impact and leave a legacy. Marty disagreed, and said I could be the change I wanted to see.

The next semester as part of Marty’s seminar class on the journalism of civil rights and social justice, I wrote a story about the 1969-1970 student building takeovers at Springfield College. This story helped educate the current campus community about racial tensions from 50 years ago and how they relate to today. I also helped those alumni reconnect after not seeing each other for almost half a century.

They now virtually meet weekly and call themselves The Legacy Alumni of Color. Still looking to make the College the best it can be, they have submitted recommendations to President Mary-Beth Cooper, and met with the College leadership team and the Board of Trustees on multiple occasions.

For The Springfield Student, I wrote an article about assistant men’s and women’s track and field coach Amanda Kulas’ athletic journey as a lesbian, which ended up earning regional recognition in the Society of Professional Journalists Mark of Excellence awards. Marty and I even have a podcast titled “Liberty, Justice, and Ball” presented by the Naismith Memorial Basketball Hall of Fame, where we interview hall of famers about basketball and social justice.

My passion for social justice has gone beyond journalism.

I am the Student Trustee on the Springfield College Board of Trustees, and president of the Men of Excellence student club. In these roles, I have helped develop the Springfield College hate speech policy, started the process of the honorary degree revocation of Avery Brundage [which has since been revoked], and hosted with President Cooper the summer conversations on race, amongst many other things.

While I have appreciated my opportunities to make change on campus, the work has been exhausting.

Since George Floyd’s and Breonna Taylor’s deaths, which sparked national uprisings not seen since the civil rights movement, BIPOC (Black, Indiginous, and People of Color) students at Springfield College have been called on more than ever to serve on seemingly millions of committees, share our experiences at every turn, and asked to give advice on how to solve racism.

All this amidst a pandemic disproportionately affecting Black and Brown people, while we balance schoolwork, endless Zoom meetings, athletics, and work.

As I leave Springfield College, I am encouraged by the progress we have made. As the Student Trustee, I have seen firsthand that even at the highest governing body of the College, conversations are happening about ways to make the institution more inclusive.

As I am writing this, video has just been released of 13-year-old Adam Toledo, who was shot and killed by police with his weaponless hands raised. Last week Daunte Wright was shot and killed during a traffic stop after an officer says she thought she was using her taser. Both happened in the middle of the trial of Derek Chauvin for killing George Floyd.

As I leave Springfield College, I am encouraged by the progress we have made. As the Student Trustee, I have seen firsthand that even at the highest governing body of the College, conversations are happening about ways to make the institution more inclusive.

I challenge our campus to recognize the depth of this work and continue to make progress without relying on the labor of Black and Brown students.

And, I hope if any student is ever considering leaving Springfield College, they’ll be lucky enough to have someone like Marty Dobrow who doesn’t let them make that mistake.

Kris Rhim ’21 is the features reporter for the Atlanta Falcons and co-host of the Liberty, Justice, and Ball podcast. He was a senior communications/sports journalism major at Springfield College when he penned this piece. While a student, he was a varsity track athlete, and wrote for the ESPN sports and pop culture website The Undefeated, Men’s Health Magazine, and many other publications. 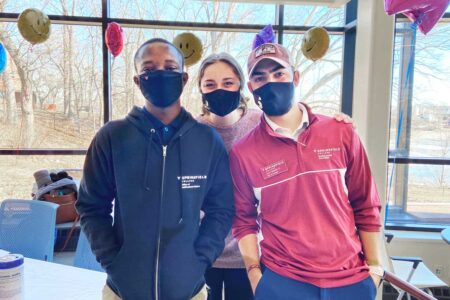 Alumni Programs
Alumni at home and on the road